The Politics of the Poor 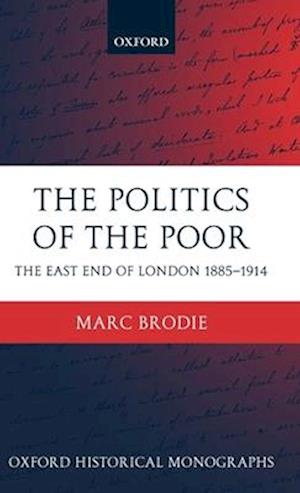 Available in paperback for the first time, this book describes the main methods of one- and two-dimensional high-resolution NMR spectroscopy in liquids within the quantum-mechanical formalism of the density matrix. In view of the increasing importance of NMR in chemistry and biochemistry, it is particularly addressed to those scientists who do not have a working knowledge of quantum calculations. This knowledge is provided in the first part of the book through adescription of quantum mechanics as applied to spin systems: this description is both self-contained and limited to the essentials. A final chapter is devoted to the principles of relaxation theory.The book will endow the reader with enough practice in the theoretical tools of NMR to enable him to analyse critically comprehensive treatises or articles on new methods.This book is about the political views of the 'classic' poor of London's East End in the late Victorian and Edwardian periods. The residents of this area have been historically characterized as abjectly poor, casually employed, slum dwellers with a poverty-induced apathy toward political solutions interspersed with occasional violent displays of support for populist calls for protectionism, imperialism, or anti-alien agitation. These factors, in combination, havebeen thought to have allowed the Conservative Party to politically dominate the East End in this period.This study demonstrates that many of these images are wrong. Economic conditions in the East End were not as uniformly bleak as often portrayed. The workings of the franchise laws also meant that those who possessed the vote in the East End were generally the most prosperous and regularly employed of their occupational group. Conservative electoral victories in the East End were not the result of poverty. Political attitudes in the East End were determined to a far greater extent by issues concerning the 'personal' in a number of senses. The importance given to individual character in the political judgements of the East End working class was greatly increased by a number specific local factors. These included the prevalence of particular forms of workplace structure, and the generally somewhat shorter length of time on the electoral register of voters in the area. Also important was acontinuing attachment to the Church of England amongst a number of the more prosperous working class.In the place of many 'myths' about the people of the East End and their politics, this study provides a model that does not seek to explain the politics of the area in full, but suggests the point strongly that we can understand politics, and the formation of political attitudes, in the East End or any other area, only through a detailed examination of very specific localized community and workplace structures.This book challenges the idea that a 'Conservatism of the slums' existed in London's East End in the Victorian and Edwardian period. It argues that images of abjectly poor residents who supported Conservative appeals about protectionism, imperialism, and anti-immigration are largely wrong. Instead, it was the support of better-off workers, combined with a general importance in the area of the 'personal' in politics emphasized by local social and workplace structures, which delivered the limitedsuccesses that the Conservatives did enjoy.

Forfattere
Bibliotekernes beskrivelse Describes the main methods of one-and two-dimensional high-resolution NMR spectroscopy in liquids within the quantum-mechanical formalism of the density matrix. It is particularly intended for those scientists who do not have a working knowledge of quantum calculations.Victorian 'East-Enders' were not as poor, jingoistic, anti-immigrant or politically Conservative as they are usually considered to be.This book shows that it was local networks and links, often of better-off workers with their loc 10 tables; 6 figures and 1 map