The Poems of Browning: Volume Four 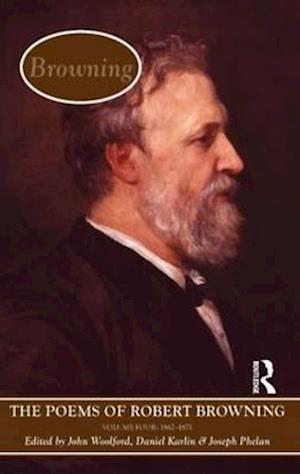 The Poems of Robert Browning is a multi-volume edition of the poetry of Robert Browning (1812 -1889) resulting from a completely fresh appraisal of the canon, text and context of his work. The poems are presented in the order of their composition and in the text in which they were first published, giving a unique insight into the origins and development of Browning's art. Annotations and headnotes, in keeping with the traditions of Longman Annotated English Poets, are full and informative and provide details of composition, publication, sources and contemporary reception. Volumes one (1826-1840) and two (1841-1846) presented the poems from his Browning's early years, while volume three (1847-61) covered the period of his marriage to Elizabeth Barrett and residence in Italy. Volume four (1862-71) deals with the decade following Elizabeth's death and Browning's return to England. These years saw the appearance of some of his most significant work, and a steady rise in his critical reputation. In Dramatis Personae (1864), Browning uses his characteristic "dramatic" mode to expose predicaments of thought and feeling, in characters ranging from Shakespeare's Caliban to the cheating medium, "Mr Sludge"; other poems dramatize Browning's complicated feelings about the deceptions and self-deceptions of romantic love. Balaustion's Adventure (1871) is an engaging reworking of Euripides' Alcestis, whose theme, the resurrection of a beloved lost wife, has poignant personal resonance for Browning;while Prince Hohenstiel-Schwangau, published in the same year, offers a thinly-veiled account of the life and actions of Napoleon III, the recently deposed Emperor of France, over whom Browning and Elizabeth had quarrelled. In these two long poems, Browning can be seen engaged in the dialogue with Elizabeth that was to shape much of his work during the remainder of his writing life.