The Plague of War

- Athens, Sparta, and the Struggle for Ancient Greece 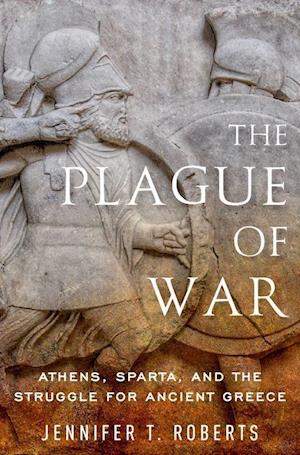 The life-and-death struggle between Athens and Sparta that embroiled all of the Greek world for an entire generation was a war that almost did not happen. Both sides entered it with hesitation, and the fortunes of war swung back and forth so wildly that at many junctures either side could have won. The plague that visited Athens in the war's early years was entirely unforeseen, as was the death in 429 of their leading statesman Pericles, who was expected to guideAthens through the war until the Spartans acquiesced. The war could have concluded many times before the conventional ending of open hostilities in 404 BCE, even as early as 425 when a team of crack Spartan troops, marooned on an island off the coast of the Peloponnesus, laid down their arms andsurrendered, something that had never happened before. Sparta sought peace to regain its men, but the Athenians thought they could get better terms and kept fighting. After 27 years of butchery on land and at sea previously unparalleled in Greece, nothing had really been gained by either side, not even by the Spartan "victors," who seemed to be as capable of winning a war as of losing a peace. War without Victory provides a superlative narrative of this famous conflict, authoritatively examining its origins and its impact on the culture and social structure of the participants. Jennifer Roberts' history will be distinguished for placing the war in a wider historical context, continuing the story down to the outbreak of the so-called Corinthian War in 395, when gold from the Persian king made it possible for Sparta's former allies to join Athens in making war on them. It willtherefore include one of the most infamous episodes in Greek history, which was partly a direct consequence of the war: the trial and execution of Socrates. Finally, it will treat the events leading up to the stunning defeat of Sparta by its former ally Thebes at the battle of Leuctra in 371, a defeat whicheffectively ended Sparta's martial dominance forever. Including a discussion of Greece's rich cultural life of the period, this book promises to be just as masterful an account as Donald Kagan's condensed one-volume history.