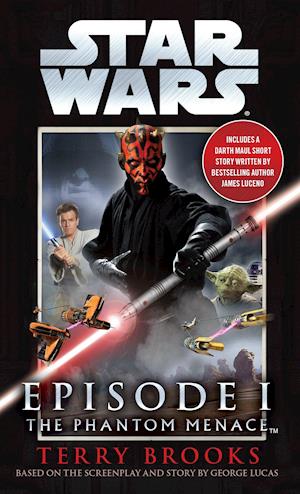 #1 NEW YORK TIMES BESTSELLER A long time ago in a galaxy far, far away, an evil legacy long believed dead is stirring. Now the dark side of the Force threatens to overwhelm the light, and only an ancient Jedi prophecy stands between hope and doom for the entire galaxy.

On the green, unspoiled world of Naboo, Jedi Master Qui-Gon Jinn and his apprentice, Obi-Wan Kenobi, arrive to protect the realm's young queen as she seeks a diplomatic solution to end the siege of her planet by Trade Federation warships. At the same time, on desert-swept Tatooine, a slave boy named Anakin Skywalker, who possesses a strange ability for understanding the "rightness" of things, toils by day and dreams by night--of becoming a Jedi Knight and finding a way to win freedom for himself and his beloved mother. It will be the unexpected meeting of Jedi, Queen, and a gifted boy that will mark the start of a drama that will become legend. This special edition features a brand-new Darth Maul short story by New York Times bestselling author James Luceno

Forfattere
Bibliotekernes beskrivelse The official novel based on the movie, this book features an expanded story line. The Jedi Knight Qui-Gon Jinn and his apprentice, Obi-Wan Kenobi, are charged with protecting Amidala, the young Queen of Naboo, as she seeks to end the siege of her planet by Trade Federation warships. The quest introduces them to a slave boy who has extraordinary instincts.