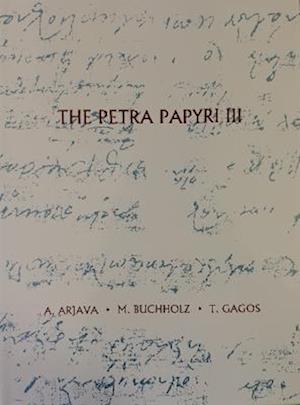 The third volume in the Petra Papyri series, the scholarly publication meticulously documenting, translating and interpreting the information recovered from approximately 140 carbonized papyrus scrolls found during ACOR's excavation of the Petra Church. The scrolls had been carbonised in a fire and were thus preserved, although many scrolls were in a destroyed condition and could not be read. Such discoveries are exceedingly rare.The Petra papyri texts are dated c. 537 to 594 thanks to the law promulgated by the Byzantine Emperor Justinian to place the date at the beginning and end of a document.The scrolls vary in size from a single sheet such as P. Petra 6 (L. 28 cm), a list of stolen goods, to the exceptionally long P. Petra 2 (L. 8.5 m), which is an agreement concerned with inherited property. These documents deal with real estate transactions, disputes, contracts, divisions of property, marriages, dowries, and inheritance.The central figures of the archive are Theodoros, son of Obodianos, who was deacon and later archdeacon in the church, and his extended family and peers. The language indicates that the people in Petra at this time were speaking an early form of Arabic.A team of papyrologists from Finland conserved these sixth century texts in 1994 and 1995 at ACOR in Amman as part of a major effort headed by Jaakko Frosen. The original fragments were placed on Japanese rice paper and sandwiched between glass plates so that they could be preserved and examined for study. Some scrolls are written on both sides (and they could not be mounted on paper) but most are single-sided. As noted, many texts have been translated and published in The Petra Papyri series (Amman: ACOR) by scholars from Finland and the University of Michigan. Some documents are exhibited at the Jordan Museum in Amman.