The Personalisation of Politics

- A Study of Parliamentary Democracies 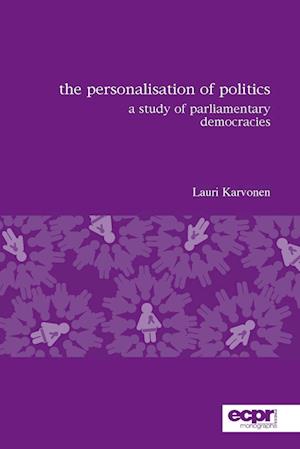 With the weakening of the structural determinants of politics in Western democracies, it is commonly assumed that individual politicians and politicians as individuals have come to mean more for voter behaviour and party choice. Many observers argue that politics has become more personalised in the course of the last few decades. Although considerable research on the various aspects of personalisation has been carried out, no single study so far has approached the question from a broad comparative perspective. By examining four central dimensions of personalisation - institutions, candidates, party leaders and media - and by including data from most stable parliamentary democracies, this book attempts to fill part of that gap. The book demonstrates clearly that there is no linear trend towards more personalisation among the cases studied. From the point of view of the general personalisation thesis, the findings are mixed at best; in some important respects, they are negative. While the media tend to focus more on individual politicians, the idea that party leaders increasingly determine the party choice of voters finds little support in empirical evidence. Most researchers seem to agree that the position of the prime minister has become more dominant. A closer look at comparative evidence results in a more complex picture. There has been a certain tendency to develop the most party-centred electoral systems in a more candidate-centred direction. On the other hand, recent reforms have altered some of the most candidate-centred systems in the opposite direction. Individual candidates seem to mean more to voters in systems where preferential voting has been practiced for a long time. This change is by no means dramatic, nor does it seem to apply to other electoral systems. Karvonen shows that the personalisation thesis, while not completely erroneous, has been overstated not just by the media but in some of the research literature as well.

Forfattere
Bibliotekernes beskrivelse By examining four central dimensions of personalisation - institutions, candidates, party leaders and media - and by including data from most stable parliamentary democracies, this book attempts to fill part of that gap.