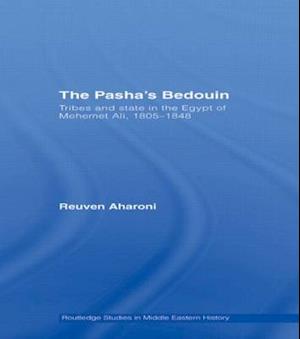 Egypt's history is interwoven with conflicts of Bedouin, governments and peasants, competing over same cultivated lands and of migrations of nomads from the deserts to the Nile Valley. Mehemet Ali's era represented the initial ending of the traditional tribalism, and the beginning of emergence of a semi-urban community, which became an integral part of the sedentarised population. Providing a new perspective on tribal life in Egypt under Mehemet Ali Pasha's rule, The Pasha's Bedouin examines the social and political aspects of the Bedouin during 1805-1848. By highlighting the complex relationships which developed between the government of the Pasha and the Bedouin, Reuven Aharoni sets out to expose the Bedouin as a specialised social sector of the urban economy and as integral to the economic and political life in Egypt at the time. This study aims to question of whether the elements of bureaucratic culture which characterised the central and provincial administration of the Pasha, indicate special attitudes towards this sector of the population. Subjects covered include: The 'Bedouin' policy of Mehemet AliTerritory and identity, tribal economies Tribe and state relationsTribal leadershipWith a long experience in fieldwork among Bedouin in the Sinai and the Negev, as well as using a range of archival documents and manuscripts both in Arabic and Ottoman Turkish, this highly researched book provides an essential read for historians, anthropologists and political scientists in the field of social and political history of the Middle East. Reuven Aharoni, Ph.D (2001) in Middle Eastern History, Tel-Aviv University, teaches history of the Middle East at the Haifa University and at the Open University of Israel.