The Papers of James Madison

indgår i serie Papers of James Madison Secretary of State 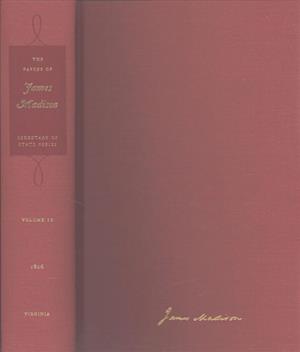 During the period covered by this volume, James Madison continued to deal with the United States' vexing relations with Europe. Mounting outrage against Great Britain's seizure of American vessels, impressment of seamen, and violations of trade agreements with British Canada erupted in Congress. While firmly rejecting Britain's maritime policy in his Examination of the British Doctrine, released in early January 1806 and published here for the first time with annotations, Madison, along with President Thomas Jefferson, actively promoted negotiations with the British government for an amicable settlement of these matters. American commerce was also threatened by French and Spanish privateers, and spoliation claims by beleaguered merchants increased exponentially. Other problems such as border incursions between Spanish and American citizens, resulting in Jefferson's expulsion of Spanish officials from Orleans territory; the filibustering expedition of Francisco de Miranda and his sympathizers; the death of an American sailor by cannon fire from a British ship off Sandy Hook, New Jersey; and the overreaching demands of the Tunisian ambassador as conditions for peace with his country also engaged Madison's attention. Included in the volume are identifications of relevant individuals and a comprehensive index.