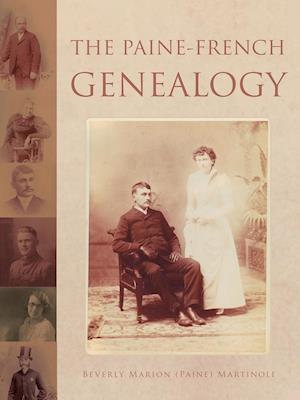 The Paine-French genealogy continues the story captured in an earlier book, "The Paine-Shepard Genealogy 1463-1913 written by Clara Paine Ohler, published in 1932, and traces the descendants of Merton K. Paine and Ella Gordon (French) Paine to the present day. While the book includes background from Clara Ohler's publication, it also refers to census reports that identify Paine and French family direct ancestry with references to other side branches. The chapter on "Cemeteries" reveals information on ancestors in Ludlow, Belchertown and Springfield, MA as well as Simsbury, CT. While William French's travels both as a single man and later after his marriage took him and his family to several interesting places eventually ending up in MA, the Paine Family ancestry can be found mostly in MA and CT. The book also includes interesting information concerning our direct ancestors, John and Sarah French, and their son William H. French and his wife Mary Dugan, parents of Ella Gordon (French) Paine. Readers will find the chapters concerning the USS Constellation, the historically verifiable accounts of William H. French's service aboard that venerable ship, and his subsequent service in the Union Army during the War of Rebellion of particular interest.