The Oxford History of the Novel in English

indgår i serie Oxford History of the Novel in English 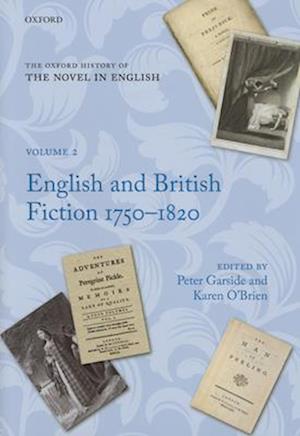 The Oxford History of the Novel in English is a 12-volume series presenting a comprehensive, global, and up-to-date history of English-language prose fiction and written by a large, international team of scholars. The series is concerned with novels as a whole, not just the 'literary' novel, and each volume includes chapters on the processes of production, distribution, and reception, and on popular fiction and the fictional sub-genres, as well as outlining the workof major novelists, movements, traditions, and tendencies.Volume 2 examines the period from1750-1820, which was a crucial period in the development of the novel in English. Not only was it the time of Smollett, Sterne, Austen, and Scott, but it also saw the establishment and definition of the novel as we know it, as well as the emergence of a number of subgenres, several of which remain to this day. Conventionally however, it has been one of the least studied areas-seen as a falling off from the heyday of Richardson and Fielding, or merely a preludeto the great Victorian novelists. This volume takes full advantage of recent major advances in scholarly bibliography, new critical assessments, and the fresh availability of long-neglected fictional works, to offer a new mapping and appraisal. The opening section, as well as some remarkable laterchapters, consider historical conditions underlying the production, circulation, and reception of fiction during these seventy years, a period itself marked by a rapid growth in output and expansion in readership. Other chapters cover the principal forms, movements, and literary themes of the period, with individual contributions on the four major novelists (named above), seen in historical context, as well as others on adjacent fields such as the shorter tale, magazine fiction, children'sliterature, and drama. The volume also views the novel in the light of other major institutions of modern literary culture, including book reviewing and the reprint trade, all of which played a part in advancing a sense of the novel as a defining feature of the British cultural landscape. A focus on'global' literature and imported fiction in two concluding chapters in turn reflects a broader concern for transnat onal literary studies in general.

Forfattere
Bibliotekernes beskrivelse Volume 2 of The Oxford History of the Novel in English provides full and unprecedented coverage of a conventionally neglected period in the history of the novel, offering a broad historical context to the period which saw the emergence of the definiton of the novel as we now know it.