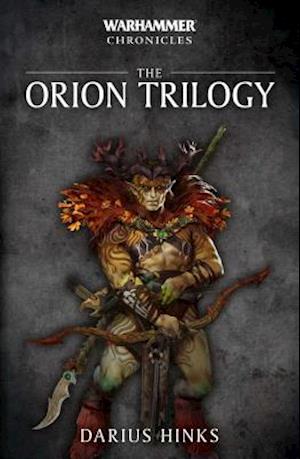 Orion is the king of the forest, the lord of Athel Loren and the guardian spirit of all that is dear to the Asrai, the mysterious Wood Elves. In three novels, he confronts old enemies and new dangers, and must appeal to all his powers and allies to ensure the safety of his ancient forest, and his own. Every year, after winter, King Orion wakes up and reigns over the forest kingdom of Athel Loren. This time though, as he slowly comes out of his torpor, he realizes that a terrible evil has taken hold of him, and that his eternal mind has been cursed. Taken of an uncontrollable rage, he leads his Asrai to the war in order to discover who is there the origin of this plot. But as corruption spreads and his powers diminish, he will have to put his fate in the hands of his most loyal subjects, and entrust them with the mission of unmasking the traitors hiding among their ranks.

Forfattere
Bibliotekernes beskrivelse Great omnibus centring around the trials and tribulations of the Wood Elves from the old world.