The Origins Of The Great Leap Forward

- The Case Of One Chinese Province 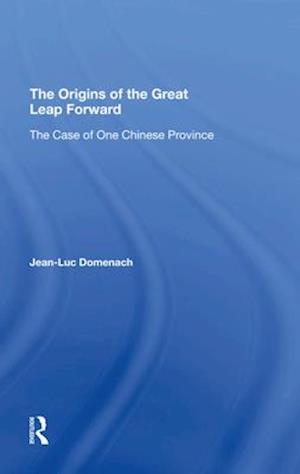 The first major study of the Great Leap Forward, this seminal volume has now been translated into English for a wider audience. Like no other work, it suggests compelling political and social answers to questions that have long plagued scholars: How could a party with such a successful rural base launch a movement so divorced from reality- especially in the countryside? Why was the movement pressed to the point of social chaos and economic collapse, giving rise to arguably the greatest famine in human history? Utilizing a wealth of primary material, Jean-Luc Domenach focuses on the central China province of Henan, which emerged as a national model of the Great Leap and was one of the most devastated by its failure. The author's documentary sources enable him to illuminate the development of provincial and local political life as well as to gauge popular reactions to the dictates of the center. Domenach presents a lucid analysis of the setbacks in agriculture in 1956 and 1957, the rise of economic corruption, and the launch of the CCP rectification campaign in 1957. Despite the enormous impact of the Great Leap on Chinese politics and economics in the decades that followed, it has proven immensely difficult to research. Domenach's contribution thus stands out as an original and important work on the period.