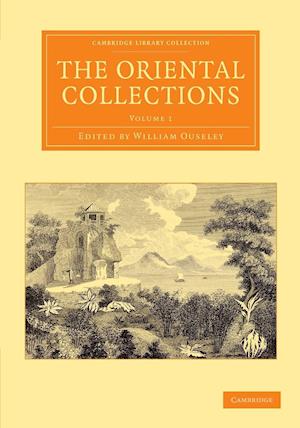 As editor and contributor, William Ouseley (1767-1842) published this three-volume collection of essays between 1797 and 1800. Educated at Paris and Leiden, Ouseley became an honorary fellow of the royal societies of Amsterdam, Goettingen and Edinburgh. He researched extensively on Persia, producing important work on Persian handwriting. Several of his translations of works by fellow orientalist J. L. Burckhardt (1784-1817) are also reissued in this series. Ouseley's Oriental Collections consists of miscellaneous pieces contributed by a number of writers on aspects of Asian history, culture and literature. Volume 1 includes translations from Persian of the poetry of Saadi, remarks on manuscript collation, translations of Arabic stories, and essays on Moroccan Arabic and the poetry of Hafez. The diverse subject matter will appeal to readers interested in the nature and progress of oriental scholarship in the late eighteenth century.

Forfattere
Bibliotekernes beskrivelse Between 1797 and 1800, editor and contributor William Ouseley (1767-1842) published this three-volume miscellany of scholarly essays by a number of writers. Volume 1 includes translations of poetry and stories from Arabic and Persian, and essays on manuscript collation, Moroccan Arabic and the poet Hafez. 2 Printed music items; 1 Plates, color; 17 Plates, black and white; 2 Line drawings, unspecified