The Obstacle is the Way

- The Ancient Art of Turning Adversity to Advantage 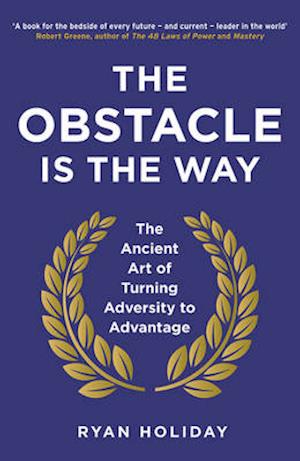 OVER ONE MILLION COPIES SOLD#1 Wall Street Journal Bestseller'Follow these precepts and you will revolutionize your life.' Steven Pressfield, author of The War of Art 'A book for the bedside of every future - and current - leader in the world.' - Robert Greene, author of The 48 Laws of PowerThe Obstacle is the Way has become a cult classic, beloved by men and women around the world who apply its wisdom to become more successful at whatever they do. We give up too easily. With a simple change of attitude, what seem like insurmountable obstacles become once-in-a-lifetime opportunities. Ryan Holiday, who dropped out of college at nineteen to serve as an apprentice to bestselling 'modern Machiavelli' Robert Greene and is now a media consultant for billion-dollar brands, draws on the philosophy of the Stoics to guide you in every situation, showing that what blocks our path actually opens one that is new and better.If the competition threatens you, it's time to be fearless, to display your courage. An impossible deadline becomes a chance to show how dedicated you are. And as Ryan discovered as Director of Marketing for American Apparel, if your brand is generating controversy - it's also potentially generating publicity.The Stoic philosophy - that what is in the way, is the way - can be applied to any problem: it's a formula invented more than 2,000 years ago, whose effectiveness has been proven in battles and board rooms ever since. From Barack Obama's ability to overcome obstacles in his election races, to the design of the iPhone, the stoic philosophy has helped its users become world-beaters.