The Nightingale and the Hawk

- A Psychological Study of Keats' Ode 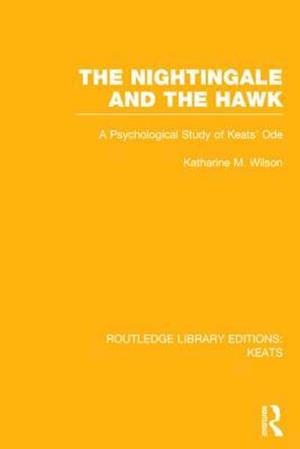 This book is the result of investiging whether Ode to a Nightingale could be interpreted as the record of an actual song that moved Keats so deeply as to involve, in Jung's terms, an experience of the Self. . It is in effect a biographical study of one aspect of Keats' life of the imagination. It suggests why he became a poet, shows how his attitude to his poetry changed, how in Jungian terms he first met his 'shadow', rejected it, then came to accept it, and how this affected his poetry.The meaning of the few psychological terms used in the book are clarified by illustration from Keats' own writing, thus contributing to its understanding at the same time.An intimate relationship between his letters and the poems is shown. First published in 1964, the study throws light on well-worn themes such as what Keats meant by beauty, his theory of 'negative capability', why he abandoned Hyperion. It gives a fresh interpretation of Endymion and of aspects of the two versions of Hyperion, Lamia, The Eve of St Agnes, and the other great odes. Among details is has something to say on why La Belle Dame kissed her knight precisely four times.