The New Crusades: What Honour is there in an Honour-Killing? 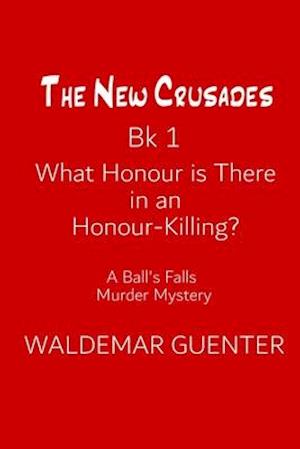 My pseudonym is Waldemar Guenter. When I first published my novel, The New Crusades, with Tellwell Publishing in 2015, I had the notion to come up with a pseudonym just for fun. The other thing was that my topic of honour-killing, a murder mystery at Ball's Falls, was a sensitive topic, so I thought it prudent to use a pretend name. Two detectives from Niagara set out to find the culprit who knifed his sister to death and left her bloody body in the woods. They track Aamir to Hamilton but his parents empty out their bank account, so that their radicalized son could fly to Turkey and make his way into the arms of ISIS. Aamir, as a former Canadian, is given the mission to come back to Canada and bomb the Toronto subway...except things do not always go according to plan.

I spent a year researching and fabricating this story. I was aghast when I googled The New Crusades by Waldemar Guenter on Amazon, only to find that a third party had priced the book at $576. I assumed that was deliberate so that nobody would buy my book, unless the third party figured the excellence of my writing was priceless! I was miffed that I had no control over the pricing of my book, as I did with Kindle Direct Publishing. A third party, in the meantime, kept phoning me from the United States, saying that they could sell my book and make it a success! I said no.

I decided to do a second edition of my 2015 book, keeping the same title and my pseudonym of Waldemar Guenter, using Kindle Direct Publishing, whom I trusted to publish my book the way I wanted with the price I wanted. I wanted to make The New Crusades affordable, so that other people could enjoy the fruits of my year's hard work. I hope that my new edition will show up side by side with my old edition on Amazon and Google, so you can see that the ridiculous price of $576 is not what you need to pay to read The New Crusades by Waldemar Guenter. Again, Waldemar Guenter is my penname, as is Alexander Kucharski, a choice of pretend names which has made royalties and recognition difficult for me. The whole idea of The New Crusades, Book 1, was to educate people and have them enjoy a good murder mystery story starting at Ball's Falls with two Niagara detectives tracking down the killer in a story that is relevant to our modern times. I hope you enjoy this second edition priced at a reasonable rate, not $576, which is insane. My writing is good but not priceless!