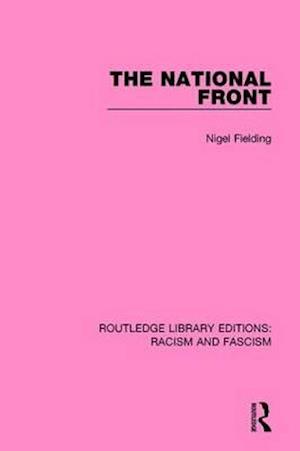 The National Front was one of the most controversial political parties in Britain. This exploration, first published in 1981, of the NF ideology and its meaning for members is based on a participation observation study which involved the development of relations with its headquarters, and with branch staff and members in several English cities. The fieldwork was carried out at marches, branch meetings and rallies, and candidates, activists, ordinary members and opponents of the NF were interviewed. Nigel Fielding examines in detail the ethnography of the National Front, describing its history, electoral performance and some demographic characteristics of its membership. He investigates the party ideology, concentrating on the key aspects of race, nationalism and conspiracy theory. The party's involvement in overt and covert political action is discussed, and tolerance of ambiguity in adherence to ideology, are explored. In a final chapter the author discusses the case for regarding active NF membership as evidence of a commitment to an alternative conception of social reality founded on fundamental disagreement with the political and social order of the status quo. This book examines the problem of the relationship between the beliefs and actions of the political deviant in the context of a group which is involved in political activism.