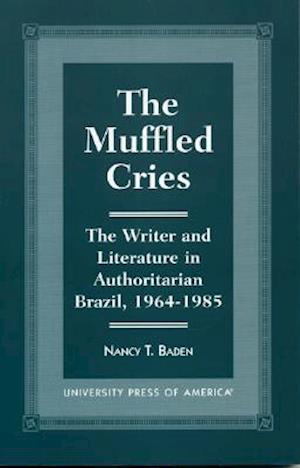 The Muffled Cries presents a multidisciplinary, historical, overview of the role of the writer and literature during Brazil's military dictatorship between 1964 and 1985. Nancy T. Baden brings together numerous sources, including personal interviews, periodicals, and books translated into English for the first time, to expose the ironies, subtleties, and complexities of the Brazilian cultural milieu under authoritarianism. She explores Brazilian fiction and poetry within this historical framework, in order to portray the role of the writer within the cultural context based on self-perception and the views of others. Baden also examines the official and unofficial controls imposed by the state and the effects they had on the literature produced. Following the varying phases of authoritarianism, she found many experimental techniques and exaggerated realism in use as a method of showing resistance by revealing the underlying sociopolitical problems, and protesting against the military. This ground-breaking work provides much new insight into the history and literature of Brazil from 1964 to 1985.