The Most Wonderful Thing in the World 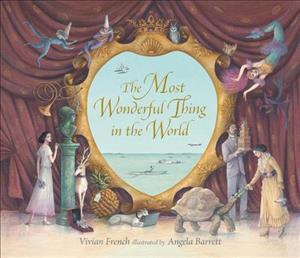 A funny and heart-warming fairy tale about our values by Vivian French, exquisitely illustrated by Angela Barrett.From the author of the Tiara Club series comes a gently satirical fairy story for our times, illustrated by one of today's finest artists, Angela Barrett. When a king and a queen promise to marry their daughter Lucia to the man who can show them the most wonderful thing in the world, suitors descend on the palace bearing gifts. Roses, jewels and exotic birds; dancing girls, wind machines and mythical beasts - but nothing feels quite right. As the last suitor leaves, his weapons of mass destruction rejected, the king and queen are exhausted. But when a shy, young man, who isn't a suitor at all, steps forward, they finally understand what the most wonderful thing in the world really is. Vivian French's masterful retelling of a forgotten story is both funny and heart-warming, and Angela Barrett's breathtaking illustrations give life to an enchanting and romantic fairytale city.

Forfattere
Bibliotekernes beskrivelse A funny and heart-warming fairy tale about our values by Vivian French, exquisitely illustrated by Angela Barrett.