The Most Disreputable Trade 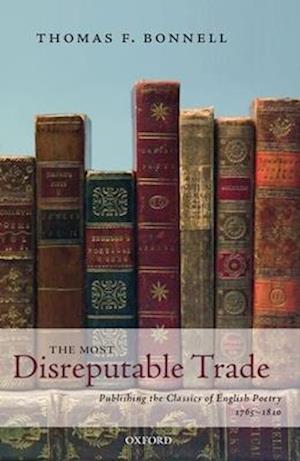 A publishing phenomenon began in Glasgow in 1765. Uniform pocket editions of the English Poets printed by Robert and Andrew Foulis formed the first link in a chain of literary products that has grown ever since, as we see from series like Penguin Classics and Oxford World Classics. Bonnell explores the origins of this phenomenon, analysing more than a dozen multi-volume poetry collections that sprang from the British press over the next halfcentury. Why such collections flourished so quickly, who published them, what forms they assumed, how they were marketed and advertised, how they initiated their readers into the rites of mass-market consumerism, and what role they played in the construction of a national literature are all questions central to the study.The collections played out against an epic battle over copyright law, and involved fierce contention for market share in the 'classics' among rival publishers. It brought despair to the most powerful of London printers, William Strahan, who prophesied that competition of this nature would ruin bookselling, turning it into 'the most pitiful, beggarly, precarious, unprofitable, and disreputable Trade in Britain'.Samuel Johnson's Lives of the Poets were part of such a collection, dubbed 'Johnson's Poets'. The third edition of this collection, published in 1810, brought the national project to its high water mark: it contained 129 poets, plus extensive translations from the Greek and Roman classics. By this point, all the features that characterize modern series of vernacular classics had been established, and never since has such an ambitious expression of the poetic canon been repeated, asBonnell shows by peering forward into the nineteenth century and beyond.Based on work with archival materials, newspapers, handbills, prospectuses, and above all the books themselves, Bonnell's findings shed light on all aspects of the book trade. Valuable bibliographical data is presented regarding every collection, forming an indispensable resource for future work on the history of the English poetry canon.