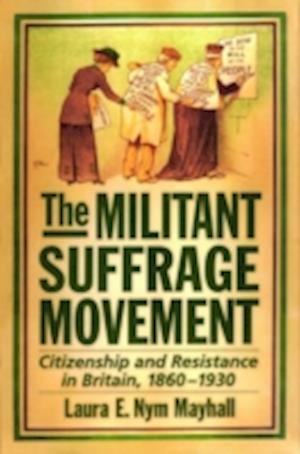 The image of upper-class women chaining themselves to the rails of 10 Downing Street, smashing windows of public buildings, and going on hunger strikes in the cause of "votes for women" have become visually synonomous with the British suffragette movement over the past century. Their story has become lore among feminists, in effect separating women's fight for voting rights from contemporary issues in British political history and disconnecting their militancy fromother forms of political militancy in Britain in the 19th and early 20th centuries. Mayhall examines the strategies that suffragettes employed to challenge the definitions of citizenship in Britain. She examines the resistance origins within liberal political tradition, its emergence during Britain'sinvolvement in the South African War, and its enactment as spectacle. Enlarging the study of the militant campaign for suffrage, Mayhall analyzes not only its implications for the social history of gender but also, and more importantly, its connections to British political and intellectual history. This book is already being touted as a critical revisionist work in the history of suffrage in Britain.