The Medieval Idea of Law as Represented by Lucas de Penna 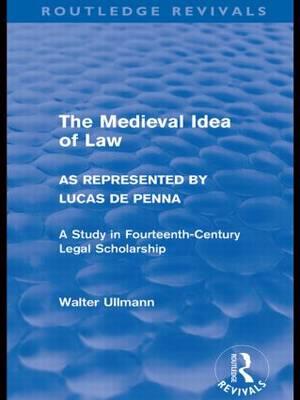 Upon its original publication in 1946, this work represented a new approach to medieval studies, offering indispensable analysis to the historian of legal, political and social ideas. Research into the original sources leads the author through unexplored realms of medieval thought. By contrasting contemporary opinions with those of his central figure, Lucas de Penna, he comprehensively presents the medieval idea of law - then regarded as the concrete manifestation of abstract justice. The intensity of medieval academic life is revealed in the heated controversies, whilst medieval criminology foreshadows modern developments. A significant discovery is the astonishingly great reliance which Continental scholars placed upon English thought. A challenge to certain current misconceptions, this book shows the resourcefulness of medieval thinking and the extent to which modern ideas were foreshadowed in the fourteenth century, a time when the ideas of law and liberty were identical.