The Matter of Song in Early Modern England

- Texts in and of the Air 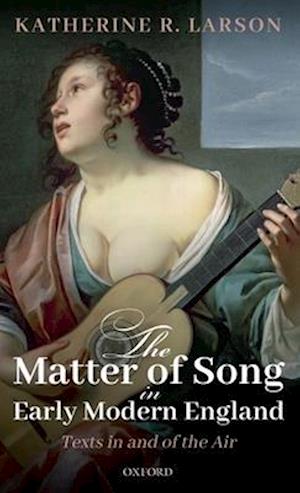 Given the variety and richness of the sixteenth- and seventeenth-century English 'songscape', it might seem unsurprising to suggest that early modern song needs to be considered as sung. When a reader encounters a song in a sonnet sequence, a romance, and even a masque or a play, however, the tendency is to engage with it as poem rather than as musical performance. Opening up the notion of song from a performance-based perspective The Matter of Song in EarlyModern England considers the implications of reading song not simply as lyric text but as an embodied and gendered musical practice. Animating the traces of song preserved in physiological and philosophical commentaries, singing handbooks, poetic treatises, and literary texts ranging from Mary Sidney Herbert's Psalmes to John Milton's Comus, the book confronts song's ephemerality, its lexical and sonic capriciousness, and its airy substance. These features can resist critical analysis but were vital to song's affective workings in the early modern period. The volume foregrounds the need to attend much moreclosely to the embodied and musical dimensions of literary production and circulation in sixteenth- and seventeenth-century England. It also makes an important and timely contribution to our understanding of women's engagement with song as writers and as performers. A companion recording of fourteen songs featuringLarson (soprano) and Lucas Harris (lute) brings the project's innovative methodology and central case studies to life.