The Master Painters of the Dutch Golden Age

- Their lives and works in 500 images 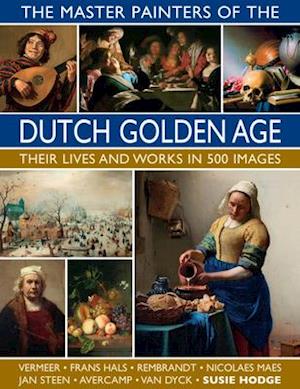 Named retrospectively, the Golden Age was a period when the new Dutch Republic had become the most prosperous nation in Europe, leading in trade, science and art. From 1600 for almost a century, more than four million paintings were produced there, and the accomplishments in realism and naturalism by a large number of Dutch artists were unprecedented.These artists painted life as had never been seen before; their technical skills were often outstanding, and their art was distinctive in its depiction of lifelike objects, places and people of all ages and backgrounds. Unlike traditional Flemish and Italian Baroque paintings, Dutch artists in general avoided idealization or portrayals of splendour, and instead developed their own unique and innovative styles, themes and subjects.The first section of this detailed book considers all this ina biographical guide to some of the greatest Dutch Golden Age artists and their work. Roughly chronological in order, it explains who the painters were, where they lived and worked, who and what taught and influenced them, and why their work was often groundbreaking. Among many others, included are Frans Hals, Rembrandt, Nicolaes Maes, Jan Lievens, Judith Leyster, Gerrit Dou, Gerrit van Honthorst, Adriaen Brouwer, Jan Steen, Hendrick Avercamp, Jacob van Ruisdael, Pieter de Hooch, Johannes Vermeer and Rachel Ruysch. While mostare discussed, some do not appear, as even in this substantial book, there is room for only a proportion of the exceptionally proficient painters of the period.The second part of the book is a gallery of outstanding works from a range of Dutch Golden Age artists, grouped into the broad themes of landscapes (and town- and seascapes), portraits, genre, history and religion, and stilllife, giving a fascinating, colourful and in-depth overview of what constituted the art of the period.With more than500 reproductions, you can dip in and out of this beautifully illustrated volume, or peruse it from cover to cover. It is essential reading for anyone who would like to learn more about the extraordinary flowering of art during the Dutch Golden Age, and a book that you will turn to over and again

Forfattere
Bibliotekernes beskrivelse A detailed reference book on the extraordinary period of art that flowered in the newly independent Dutch Republic, with works from c.1600 to c.1680, with biographies of the most significant artists and an extensive gallery of thematic works. 500 colour reproductions