The Magic of Aesop: How to Use The Wisdom of Aesop to Spark Your Transformational Change 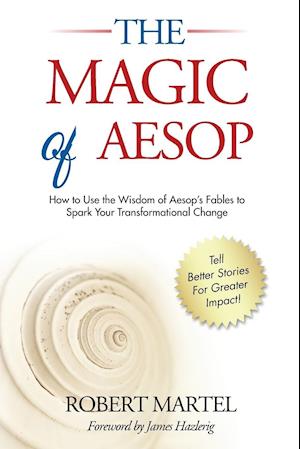 Are you telling a good story to yourself and to others? Do you want to help people make important changes in their life, as they work with their own power of intention? Now you can become a more effective agent of change as a fabulous Aesopian fabulist! Discover the magic of accessing the wisdom of Aesop to provide healthy, positive change!

Stories are about change and, as master storyteller James Halzerig states in the foreword of this book, stories are fundamental to human experience. A good story lowers resistance to hearing an important message to be accepted by the subconscious mind, all toward affecting positive action. We have all been spellbound when a mesmerizing story captures our attention and we find the meaning for our own lives. If you have ever struggled to find the right story to share with a client, a friend, a business associate, or even for your own mind to hear, then you will find this book both entertaining and instructional. Filled with insights and anecdotes from the legend of Aesop and with examples of Aesop's fables used in a clinical hypnosis setting to affect change, The Magic of Aesop will, indeed spark a transformation and set the reader and the listener on a new trajectory. This book offers specific examples whereby the addition of a fable or two, a moral or two and a few well placed hypnotic suggestions have helped with a wide variety of human issues, presented by a fox, a crow, a mouse, a lion, an eagle, the north wind, the sun and a host of characters from Mother Nature.

it's all laid out for you in The Magic of Aesop. Read it and start your own Aesopian journey!

As Hazlerig explains in the foreword:

"Existing in a world where we have no fur to keep us warm, no claws and only paltry teeth to fight off attackers, and slow reflexes compared to other predators-indeed no physical advantages as a species other than a knack for endurance-running that lies atrophied beyond use in so many of us-knowledge, community, and the ability to share both are traits at the core of our survival. You could argue that being able to use fire and make tools are just as vital, but the knowledge to do both was passed from human to human; often as they gathered around a fire to tell each other stories, creating the first communities.

We don't know the name of the first human to harness fire, but their knowledge has outlived their name. We don't know who wrote Gilgamesh, the first epic poem, but the story they composed is still told and retold, speaking to the futility of mortality as much to us today as it did in ancient Mesopotamia. While a name may be the label of an identity, the story that is told about the identity is the essence of the identity itself.

Praise for The Magic of Aesop:

"You are about to embark on a great book by a gifted author. Bob Martel will take you on a journey as Aesop has through the Centuries of many lives. As Aesop did, Bob Martel will teach you to weave stories that influence. He will help you create an excellent hypnosis experience for your client. Bob is an expert on Aesop's Fables and often you will feel he is actually Aesop, channeling his wit and wisdom. This is a Hypnosis book that, to this point, has never been written. It is a first!" -Larry Garrett, Master Hypnotist and author of Healing the Enemy.