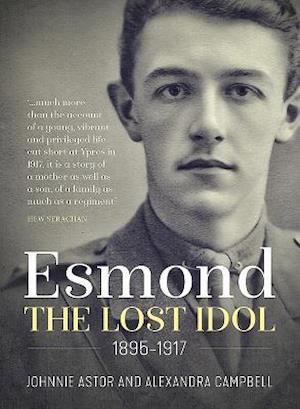 Esmond Elliot, younger son of the Earl of Minto, Viceroy of India, was killed while serving with the Scots Guards, aged 22, at the beginning of the Passchendaele Offensive. Compiled from his grieving mother's memorial of his life, together with his letters, diaries and photographs from the front, the story begins with a sweeping panorama of a golden pre-war era, featuring Canada, the splendour of the Raj, Eton and the Royal Family, and ends with sacrifice on the Western Front. After leaving Eton in 1914, Esmond gave up his place at Cambridge and joined the Lothians and Border Horse Yeomanry. He arrived in France in February 1916 as ADC to Geoffrey Feilding who was in charge of the Guards Division. As a staff officer, he was exposed to the complexities and responsibilities of High Command and to senior military figures, but he yearned for action and, six months later, joined the Scots Guards, a regiment which would take him to the frontline. During the bitter winter of 1916/17, he saw fierce fighting on the Somme, when his Battalion suffered terrible losses. In preparation for the Passchendaele Offensive, which began on 31 July 1917, Esmond led a daring raid across the Yser Canal, returning with vital intelligence which helped the Guards Division in their successful seizure of the bank on the enemy side four days before the main assault. A week later, while in command of his Company, he was killed by a single bullet. Esmond's jottings, direct and spontaneous, reveal the rapid transformation and maturing of a young officer exposed to war. His mother's collection of letters shows the extent to which one life, albeit brief, touched so many people and how the memory of it, and the influence of his goodness, left a lasting impression. John Buchan wrote of Esmond: "His gallantry was remarkable even among gallant men and in the darkest days his debonair and gentle spirit made a light around him." And in a letter to Esmond's mother, his Platoon Sergeant paid the following tribute: "We have lost our idol for we had set him on a pedestal in our hearts. He came to us and claimed our affections so that, now he has gone, we will miss him more than words can tell."Professor Sir Hew Strachan: "The account of a young vibrant and privileged life cut short at Ypres in 1917 is at one level a familiar one, not least in its apparent tragic inevitability. But The Lost Idol is much more. It is the story of a mother as well as a son, of a family as much as a regiment. And alongside the words are the pictures. Esmond Elliot, like many soldiers of the First World War, recorded his experiences with a Kodak Vest Pocket Camera: new technology enabled images to give wings to his words."

Forfattere
Bibliotekernes beskrivelse Original, unpublished diaries, letters and remarkable photographs; featuring Canada, the splendour of the Raj, Eton and the Royal Family; reconstruct the life of Esmond Elliot, officer in the Scots Guards, who led a strategically decisive raid before dying a hero, aged 22, at the beginning of 3rd Ypres. 100 ills, maps