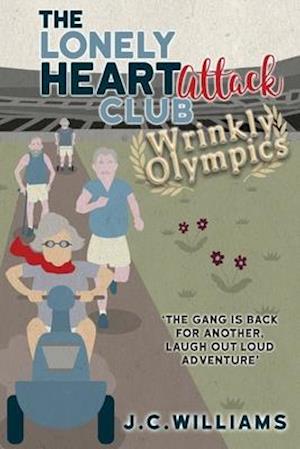 The hilarious sequel to the best selling, feel-good comedy

The third book in the series, "The Lonely Heart Attack Club Project VIP" is also now available on Amazon 'After reading the first book I hoped for the same or better. I wasn't disappointed''A brilliant book so well written, it wraps you up in the characters and with the twists and comedy moments you never want to put it down. Fantastic ''This sequel is every bit as funny as the first book and covers a serious subject in a very lighthearted way, and you can't help getting swept along in Jack's well-meaning but usually hapless exploits

Jack, Emma and the gang from the Lonely Heart Attack Club (Isle of Man branch) are back... For their next challenge, how will they surpass a World Record attempt? Get their members to compete in an Olympic Games for the elderly, of course The 'Wrinkly Olympics' is a feel good, heart-warming story that's sublimely funny. The old folk have been in training, but will the 'Silver Sprinters' walk away with a gold medal?