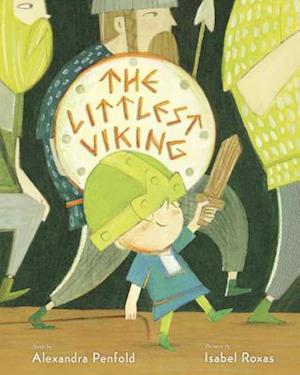 A hilarious story about what happens to the littlest and loudest Viking when an even littler and louder Viking arrives, perfect for fans of The Princess and the Pony and I Don't Want to Be a Frog. Sven might be the littlest Viking, but he has no trouble making himself known. He has the loudest warrior cry and the fiercest set of teeth. He loves to pillage and plunder. But there's a new kid in town--a warrior princess, who is smaller than Sven and even louder. What's a little Viking to do?

"Penfold folds in fun ancient analogues to tried-and-true methods of appeasing cranky little ones, and Roxas's liberal use of a color perhaps best described as neon snot brings a punk edge to her scenes of Viking family life. Irreverent yet tender."--Publishers Weekly, Starred review "A warm tale of family togetherness."--Kirkus

"A spirited tale about stopping a tantrum with a story, perfect for storytime or one-on-one sharing."--SLJ

Forfattere
Bibliotekernes beskrivelse A hilarious story about what happens to the littlest and loudest Viking when an even littler and louder Viking--his warrior-princess baby sister--arrives.s.