The Line of Polity 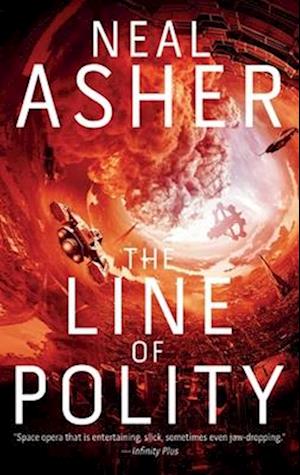 On a remote planet, with mysterious forces swirling around him, Agent Ian Cormac returns to face a threat that could endanger the entirety of the Polity. The outlink station of Miranda has been destroyed. Nobody knows why, but all the signs point to Dragon, a gigantic bioconstructed entity. Agent Cormac is sent to investigate. In his quest for the truth, Cormac navigates through the deadly world of Masada--a planet with no breathable air and full of monstrous predatory creatures, including the weird and terrible gabbleducks. All the while, on that dangerous world, a long-term rebellion from its slave population bubbles, nearly ready to boil over, kept in check only by an arsenal of powerful laser arrays controlled by an elite group called the Theocracy. And roaming the planet at the same time is the mysterious rogue biophysicist Skellor, who possesses something so powerful that Polity AIs will stop at nothing to acquire it. But just how powerful is it? And how does everything connect? Only Agent Cormac can find out . . . Night Shade Books is proud to reissue Neal Asher's Agent Cormac series, a fast-moving, edge-of-your-seat science fiction adventure from one of today's most exciting SF talents.