The Life and Literary Pursuits of Allen Davenport 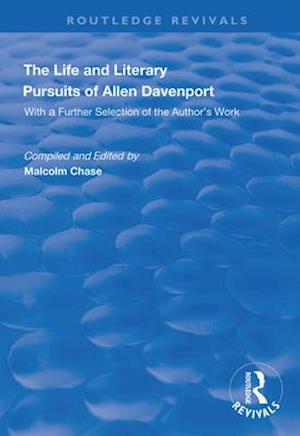 First published in 1994, this volume features an autobiography of Allen Davenport, a key figure linking Chartism with the French Revolution, along with some of his selected works. Davenport was an important propagandist for agrarian reform, a critical follower of Robert Owen, one of the first male supporters of the feminist causes and birth control and a leading member of the revolutionary underground movement in Regency London. He was a prolific author, political journalist and poet. His autobiography, published in 1845, has long been presumed lost - historians have had to make do with tantalising fragments from contemporary reviews. When a copy was found in Nashville in 1982 it was immediately recognised as a unique source of information about nineteenth-century popular politics. This volume reprints the complete text with editorial apparatus and supplemented by a careful selection of Davenport's other writing by Dr Malcolm Chase. The Life and Literary Pursuits of Allen Davenport thus gives a unique insight into the cultural and political life of England in the crowded years between Peterloo and Chartism.