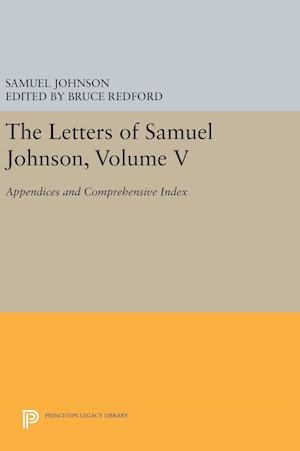 With these two volumes Princeton University Press concludes the first scholarly edition of the letters of Samuel Johnson to appear in forty years. Volume IV chronicles the last three years of Johnson's life, an epistolary endgame that includes the breakup of the friendship with Hester Thrale and a poignant reaching out to new friends and new experiences. Volume V includes not only the comprehensive index but those undated letters that cannot confidently be assigned to a specific year, "ghost" letters (those whose existence is documented in other sources), three letters that have recently been recovered, and translations of Johnson's letters in Latin. Bruce Redford is Professor of English at the University of Chicago and the author of The Converse of the Pen: Acts of Intimacy in the Eighteenth-Century Familiar Letter (Chicago). Originally published in 1994. The Princeton Legacy Library uses the latest print-on-demand technology to again make available previously out-of-print books from the distinguished backlist of Princeton University Press. These editions preserve the original texts of these important books while presenting them in durable paperback and hardcover editions.The goal of the Princeton Legacy Library is to vastly increase access to the rich scholarly heritage found in the thousands of books published by Princeton University Press since its founding in 1905.