The Letters and Diaries of John Henry Newman: Volume VIII: Tract 90 and the Jerusalem Bishopric

indgår i serie Letters and Diaries of John Henry Newman 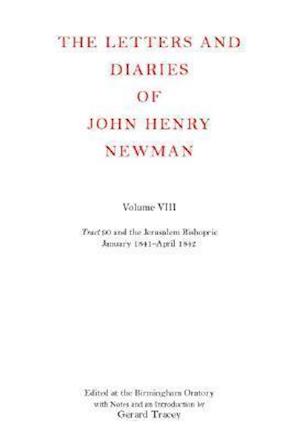 John Henry Newman (1801-90) was brought up in the Church of England in the Evangelical tradition. An Oxford graduate and Fellow of Oriel College, he was appointed Vicar of St Mary's Oxford in 1828; from 1839 onwards he began to have doubts about the claims of the Anglican Church and in 1845 he was received into the Roman Catholic Church. He was made a Cardinal in 1879. His influence on both the restoration of Roman Catholicism in England and the advance of Catholicideas in the Church of England was profound. Volume VIII covers a turbulent period in Newman's life with the publication of Tract 90. His attempt to show the compatibility of the 39 Articles with Catholic doctrine caused a storm both in the University of Oxford and in the Church. He and others were horrified by the establishment of a joint Anglo-Prussian Bishopric in Jerusalem, considering it an attempt to give Apostolical succession to an heretical church. In 1842 he moved away from the hubbub of Oxford life to nearbyLittlemore.

Forfattere
Bibliotekernes beskrivelse John Henry Newman (1801-90) was brought up and educated in the Church of England in the Evangelical tradition, but from 1839 onwards he began to have religious doubts and in 1845 was received into the Roman Catholic Church. This volume of his letters covers a particulary turbulent time in his life.