The Letters and Diaries of John Henry Newman Volume IX

indgår i serie Letters and Diaries of John Henry Newman 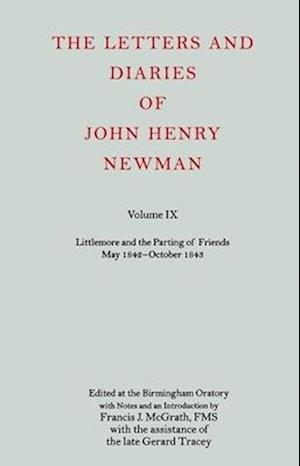 John Henry Newman (1801-90) was brought up in the Church of England in the Evangelical tradition. An Oxford graduate and Fellow of Oriel College, he was appointed Vicar of St Mary's Oxford in 1828; from 1839 onwards he began to have doubts about the claims of the Anglican Church and in 1845 he was received into the Roman Catholic Church. He was made a Cardinal in 1879. His influence on both the restoration of Roman Catholicism in England and the advance ofCatholic ideas in the Church of England was profound. This volume covers a crucially important and significant period in Newman's life. The Church of England bishops' continuing condemnation of Tract 90 - plus Pusey's two-year suspension for preaching a university sermon on the Real Presence - are major factors in Newman resigning as Vicar of St Mary's, Oxford. His doubts about the Church of England are deeper and stronger than ever, and he is moving closer to Rome. William Lockhart's sudden defection to Rome in August 1843 precipitateshis resignation. He preaches his final Anglican sermon, 'The Parting of Friends', and retires into lay communion at Littlemore. The first edition of University Sermons, including the celebrated sermon on theological development, virtually sells out within a fortnight.