The Legion of Flame

- Book Two of the Draconis Memoria 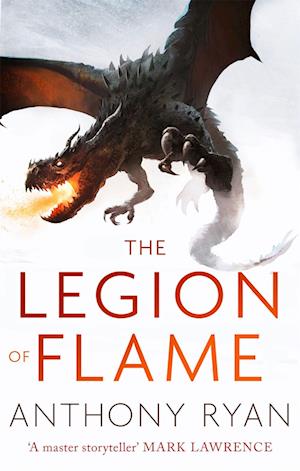 'Fabulous . . . Sure to be another fantasy classic' Huffington Post UK'A marvellous piece of imagination with plenty of twists, a refreshingly different setting, and excellent world-building' Mark LawrenceClaydon Torcreek has survived drake-infested jungles, hostile tribes and the cold touch of betrayal - yet his troubles have only just begun.The legendary white drake - believed to be nothing more than a myth - has awoken from its long slumber with a thirst to reduce the world of men to ashes.One city has already fallen to the drake's formidable legions. More will follow, unless Clay can uncover an ancient secret that lies buried beneath the southern ice.Once again Clay must face unthinkable danger, and this time he carries not just the hopes of his own nation, but the fate of the entire world.The Legion of Flame is the action-packed second novel in the Draconis Memoria series - an enthralling epic fantasy of magic, adventure and the furious battle to forge an empire.Praise for the series: 'The world Ryan has created for his new dragon adventure is a joy to visualise' SciFiNow'A fascinating world packed with dragons, pirates, political machinations and an interesting magic system to boot' Fantasy Faction'Memorable characters and great action' Django Wexler'Excellent epic fantasy' BookBagBooks by Anthony Ryan: Draconis Memoria The Waking FireThe Legion of FlameThe Empire of AshesRaven's ShadowBlood SongTower LordQueen of FireRaven's BladeThe Wolf's Call The Black SongThe Covenant of SteelThe Pariah

Forfattere
Bibliotekernes beskrivelse The Legion of Flame is the action-packed second novel in the Draconis Memoria series - an enthralling epic fantasy of magic, adventure and the furious battle to forge an empire, from international bestselling author Anthony Ryan