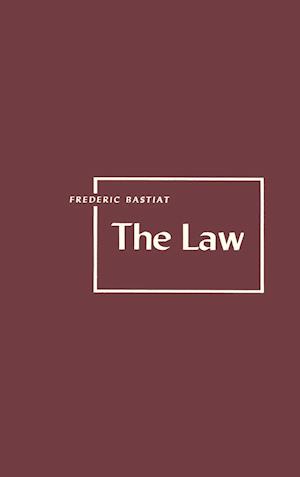 2021 Hardcover Reprint of 1950 American Edition. Full facsimile of the original edition, not reproduced with Optical Recognition Software. Frederic Bastiat (1801-1850) was a French economist, statesman and author. He did most of his writing during the years just before and just following the Revolution of February 1848 in France. This was the period during which France was turning to Socialism. "The Law" is here presented again because the same situation was perceived to being transpiring in American in 1950, when this translation was first published. The explanations and arguments then advanced against socialism by Mr. Bastiat are were equally relevant for many Americans in the 1950s. Contents: Life is a gift from God -- What is law? -- A just and enduring government -- The complete perversion of the law -- A fatal tendency of mankind -- Property and plunder -- Victims of lawful plunder -- The results of legal plunder -- The fate of non-conformists -- Who shall judge? -- The reason why voting is restricted -- The answer is to restrict the law -- The fatal idea of legal plunder -- Perverted law causes conflict -- Slavery and tariffs are plunder -- Two kinds of plunder -- The law defends plunder -- How to identify legal plunder -- Legal plunder has many names -- Socialism is legal plunder -- The choice is before us -- The proper function of the law -- The seductive lure of socialism -- Enforced fraternity destroys liberty -- Plunder violates ownership -- Three systems of plunder -- Law is force -- Law is a negative concept -- The political approach -- The law and charity -- The law and education -- The law and morals -- A confusion of terms -- The influence of socialist writers -- The socialists wish to play God -- The socialists despise mankind -- A defense of compulsory labor -- A defense of paternal government -- The idea of passive mankind -- Socialist ignore reason and facts -- Socialists want to regiment people -- A famous name and an evil idea -- A frightful idea -- The leader of the democrats -- Socialists want forced conformity -- Legislators desire to mold mankind -- Legislators told how to manage men -- A temporary dictatorship -- Socialists want equality of wealth -- The error of the socialist writers -- What is liberty? -- Philanthropic Tyranny -- The socialists want dictatorship -- Dictatorial arrogance -- The indirect approach to despotism -- Napoleon wanted passive mankind -- The vicious circle of socialism -- The doctrine of the democrats -- The socialist concept of liberty -- Socialists fear all liberty -- The superman idea -- The socialists reject free choice -- The cause of French revolutions -- The enormous power of government -- Politics and economics -- Proper legislative functions -- Law and charity are not the same -- The high road to communism -- The basis for stable government -- Justice means equal rights -- The path to dignity and progress -- Proof of an idea -- The desire to rule over others -- Let us now try liberty.