The Law of Entry, Search, and Seizure 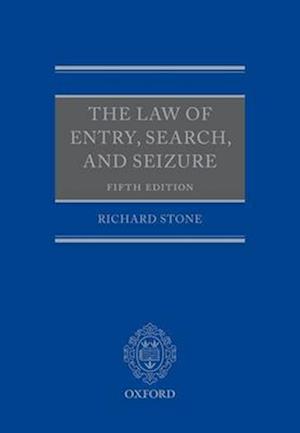 In recent years, the law relating to entry, search and seizure has undergone major change. Significant legislation, including the Protection of Freedoms Act 2012, has led to the amendment and abolition of powers, creating a complex and dynamic legal landscape. What powers are available? Who may use them? And under what circumstances? A practical guide to the powers available in both criminal and civil proceedings, The Law of Entry, Search and Seizure offers comprehensive analysis of the powers available to the police and other officials in light of all the relevant legislation. It contains exhaustive treatment of police powers both at common law and under the Police and Criminal Evidence Act 1984 and subsequent legislation such as the Serious Organised Crime and Police Act 2005, including powers of personal searchas well as searches of premises. The book also covers the powers of many other officials, such as the HM Revenue and Customs, trading standards officers, and the powers of central and local government officers. Focussing in particular on the most commonly-used powers, but with reference to others which are available, this new edition offers expert analysis of the ways in which powers are typically used, and the constraints which exist in relation to them.

Forfattere
Bibliotekernes beskrivelse The Law of Entry, Search and Seizure offers comprehensive explanation and analysis of the powers available to the police and other officials. Covering powers of personal search as well as searches of premises, the book provides a practical guide to the powers available in criminal and civil proceedings.