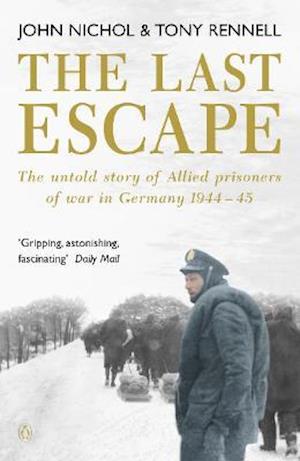 The Last Escape by Tony Rennell and John Nichol is an extraordinary look at the final days of World War II.As WW2 drew to a close, hundreds of thousands of British and American prisoners of war, held in camps in Nazi-occupied Europe, faced the prospect that they would never get home alive. In the depths of winter, their guards harried them on marches outof their camps and away from the armies advancing into the heart of Hitler's defeated Germany. Hundreds died from exhaustion, disease and starvation. THE LAST ESCAPE is told through the testimony of those heroic men, now in their seventies and eighties and telling their stories publicly for the first time.'Gripping, moving and thoughtful. The excellent team of Nichol and Rennell have done it again' Patrick Bishop, author of Fighter BoysJohn Nichol is a former RAF flight lieutenant whose Tornado bomber was shot down on a mission over Iraq during the first Gulf War. He was captured and made a prisoner of war. Tony Rennell is a writer for the Daily Mail and a former deputy editor of the Sunday Times. Their previous books include The Last Escape, Tail-End Charlies and Medic.

Forfattere
Bibliotekernes beskrivelse As WW2 drew to a close, thousands of British and American prisoners of war, held in camps in Nazi-occupied Europe, faced prospect that they would never get home alive. In depths of winter, their guards harried them on marches out of their camps and away from armies advancing into heart of Hitler's defeated Germany. This title tells their story.