The Landowners of the Argentine Pampas 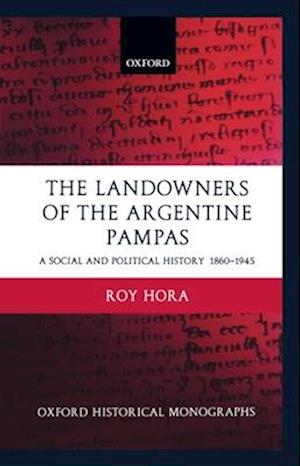 This is a social and political history of the Argentine landowners, for many decades Latin America's most affluent propertied class. Roy Hora develops a historically based view of how socio-economic and political change affected the landowners and was in turn affected by them between the 1860s and 1940s. He questions the excessively static picture of the landowners of the pampas, which unquestioningly accepts the image of power, lineage, and permanence given by bothpanegyrists and critics of the estancieros. Dr Hora challenges the view of a powerful, reactionary landed class, dominating the country's history from colonial times to the rise of Peronism in the 1940s. But he also challenges revisionist interpretations which seek to de-emphasize the central roleplayed by the landowning class in the evolution of modern Argentina.

Forfattere
Bibliotekernes beskrivelse This is a social and political history of the Argentine landowners, Latin America's most affluent propertied class. Roy Hora explores the making and evolution of a new landowning class in the period c.1860-1945, and examines the peculiarities of the relationships between landowners, political power, and the state during this period.