The Lady with the Dog and Other Stories The Tales of Chekhov Vol. III 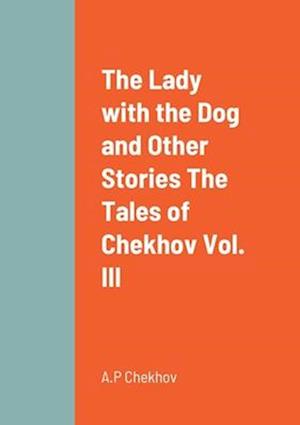 The Lady with the Dog and Other Stories The Tales of Chekhov Vol. IIIGrisha, a fat, solemn little person of seven, was standing by the kitchen door listening and peeping through the keyhole. In the kitchen something extraordinary, and in his opinion never seen before, was taking place. A big, thick-set, red-haired peasant, with a beard, and a drop of perspiration on his nose, wearing a cabman's full coat, was sitting at the kitchen table on which they chopped the meat and sliced the onions. He was balancing a saucer on the five fingers of his right hand and drinking tea out of it, and crunching sugar so loudly that it sent a shiver down Grisha's back. Aksinya Stepanovna, the old nurse, was sitting on the dirty stool facing him, and she, too, was drinking tea. Her face was grave, though at the same time it beamed with a kind of triumph. Pelageya, the cook, was busy at the stove, and was apparently trying to hide her face. And on her face Grisha saw a regular illumination: it was burning and shifting through every shade of colour, beginning with a crimson purple and ending with a deathly white. She was continually catching hold of knives, forks, bits of wood, and rags with trembling hands, moving, grumbling to herself, making a clatter, but in reality doing nothing. She did not once glance at the table at which they were drinking tea, and to the questions put to her by the nurse she gave jerky, sullen answers without turning her face. "Help yourself, Danilo Semyonitch," the nurse urged him hospitably. "Why do you keep on with tea and nothing but tea? You should have a drop of vodka!" And nurse put before the visitor a bottle of vodka and a wine-glass, while her face wore a very wily expression. "I never touch it.... No ..." said the cabman, declining. "Don't press me, Aksinya Stepanovna." "What a man! ...A cabman and not drink! ...A bachelor can't get on without drinking. Help yourself!" The cabman looked askance at the bottle, then at nurse's wily face, and his own face assumed an expression no less cunning, as much as to say, "You won't catch me, you old witch!" "I don't drink please excuse me. Such a weakness does not do in our calling. A man who works at a trade may drink, for he sits at home, but we cabmen are always in view of the public. Aren't we? If one goes into a pothouse one finds one's horse gone if one takes a drop too much it is worse still before you know where you are you will fall asleep or slip off the box. That's where it is."