The Infancy of Speech and the Speech of Infancy 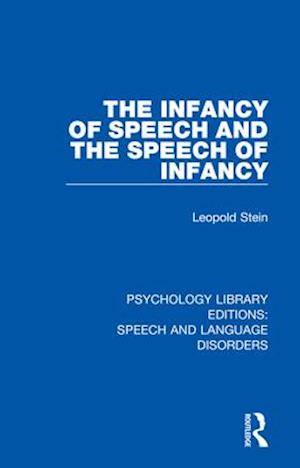 For many centuries scientists and philosophers have endeavoured to solve the baffling problem of human language. Originally published in 1949, Dr Stein had been fascinated by this problem and collected an enormous amount of data from past and present ages which, when viewed together, shed light upon the origin, evolution and meaning of human speech. He adheres to the broad concept that the development of the individual is a brief recapitulation of the evolution of the race, and has attempted to apply this principle to the solution of the problem of language. For this purpose, he has delved into the realms of prehistory, history, comparative philology, anatomy, physiology and psychology and has made conjectures from his data as to the prehistoric patterns of human speech. Where direct evidence is lacking he has resorted boldly to analogy and fantasy. The result is an intriguing mosaic which should prove interesting to all those concerned with the promotion of human relations which are, to a great extent, dependent on communication through speech. The work is crowned by the fact that his assumptions were being verified by the promising results obtained in the treatment of speech disorders based upon them at the time.