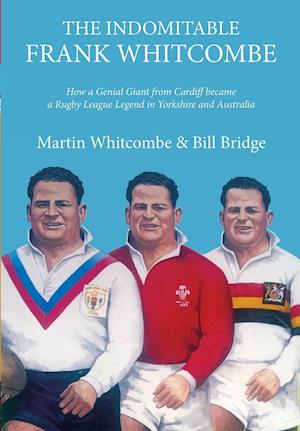 Frank Whitcombe, described as 'one of the greatest Welsh rugby league forwards of all time', played for Bradford Northern, Wales, and Great Britain. Adored by Bradford supporters and admired by the rugby league fraternity, such was his prowess that he was named in the Bradford Northern all-time greats team. The Indomitable Frank Whitcombe, lovingly tells the incredible story of a rugby league legend who was born and raised, as one of ten children in Grangetown, the heart of working-class Cardiff. Frank's rugby career, after a brief and successful spell as a boxer, began in rugby union, when he played for the British Army and London Welsh, as a deceptively nimble and skilful 18 stone forward. His talents were quickly spotted by rugby league scouts, and Frank was persuaded to 'go north' for GBP100 and two new suits, although the cost of buying himself out of the Army left him just GBP10, and the suits! Frank was made for rugby league and he enjoyed a glittering career in professional rugby, winning the RL Challenge Cup three times, the RL Championship three times and was capped 14 times by Wales.He quickly created a big impression on the Great Britain selectors and he was chosen for the famous 1946 'Indomitables' tour of Australia.Frank excelled as the tourists made history and won plaudits from antipodean fans and media alike as the team became the first, and to date only GB tourists, to win a rugby league Test Series, undefeated, 'down under'. After 331 games, Frank bowed-out of rugby with Bradford Northern, four days after playing in a Challenge Cup final at Wembley, in his last match at Odsal; a game which attracted 19,000 fans. He then turned to life as an RL administrator and publican before his life was tragically cut short by pneumonia at the age of only 44. Frank was a true giant of rugby league and this is the first book to tell his remarkable story.

Forfattere
Bibliotekernes beskrivelse This is the remarkable story of Frank Whitcombe, a rugby league legend from Cardiff, who enjoyed a glittering career with Bradford Northern, Wales and Great Britain, winning the Challenge Cup three times, the Championship three times, was capped 14 times by Wales and starred in the 1946 'Indomitables' Great Britain Tour of Australia. 190