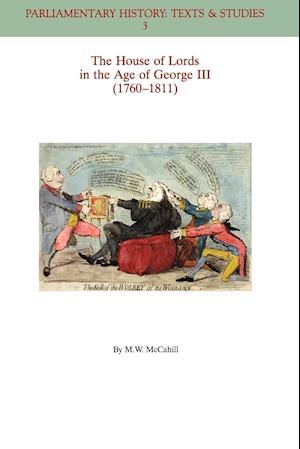 A full and comprehensive assessment of the place of the 18th-century peerage and House of Lords. * Uses statistical and anecdotal evidence to create a variegated portrait of the nobility, its political outlook, and the ways in which the nobility's multifarious roles combined to shape its members' conduct as peers of parliament* Challenges the assumption that the Lords remained a creature of the crown and demonstrates that peers and bishops were useful, informed, and broadly connected legislators* Incorporates the results of recent research on the role of ideology in 18th-century British politics and the legislative business of parliaments* Draws on contemporary newspapers and journals and over 120 manuscript collections, some not previously consulted by students of the House* Offers new insights into the Lords' changing relations with the crown and the Commons, traces the metamorphosis of the 'party of the crown' into an ultra-tory connection, and demonstrates that even as it resisted some political and social reform, the Lords was a useful legislative chamber that adapted effectively to the rising volume of business

Forfattere
Bibliotekernes beskrivelse A full and comprehensive assessment of the place of the 18th-century peerage and House of Lords.