- Can Courts Bring About Social Change? 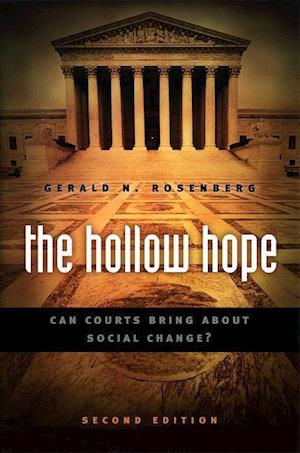 In follow-up studies, dozens of reviews, and even a book of essays evaluating his conclusions, Gerald N. Rosenberg's critics - not to mention his supporters - have spent nearly two decades debating the arguments he first put forward in "The Hollow Hope". With this substantially expanded second edition of his landmark work, Rosenberg himself steps back into the fray, responding to criticism and adding chapters on the same-sex marriage battle that ask anew whether courts can spur political and social reform.Finding that the answer is still a resounding no, Rosenberg reaffirms his powerful contention that it's nearly impossible to generate significant reforms through litigation. The reason? American courts are ineffective and relatively weak - far from the uniquely powerful sources for change they're often portrayed to be. Rosenberg supports this claim by documenting the direct and secondary effects of key court decisions - particularly Brown v. Board of Education and Roe v. Wade.He reveals, for example, that Congress, the White House, and a determined civil rights movement did far more than Brown to advance desegregation, while pro-choice activists invested too much in Roe at the expense of political mobilization. Further illuminating these cases, as well as the ongoing fight for same-sex marriage rights, Rosenberg also marshals impressive evidence to overturn the common assumption that even unsuccessful litigation can advance a cause by raising its profile.Directly addressing its critics in a new conclusion, "The Hollow Hope" promises to reignite for a new generation the national debate it sparked seventeen years ago.

Forfattere
Bibliotekernes beskrivelse In follow-up studies, dozens of reviews, and even a book of essays evaluating his conclusions, Gerald N Rosenberg's critics have spent years debating the arguments he first put forward in "The Hollow Hope". Addressing its critics in a fresh conclusion, this work reignites for a new generation the national debate it sparked years ago. 8 line drawings, 35 tables