The Hodgkiss Mysteries: Hodgkiss and the Lillimoor Ladies' Tennis Club and Other Stories 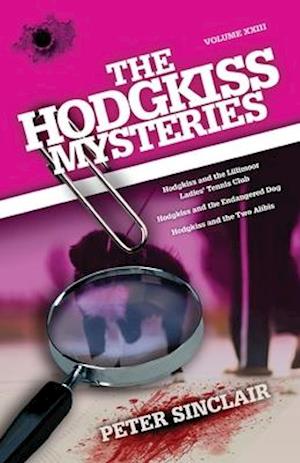 Hodgkiss is witness to an unpleasant scene where an outraged wife threatens her husband's mistress in front of the diners in a crowded Chinese restaurant. When the mistress is viciously murdered the wife moves to the top of Detective Inspector Donald Burke's list of suspects. Donald is not pleased when Hodgkiss demonstrates once again that his investigation is running down the wrong track.

One of the regular dog-walkers Hodgkiss meets at the local off-leash oval has written a will in favour of his dog. When the man dies his brother

inherits the dog together with many responsibilities that prove rather burdensome if he is to enjoy the other benefits of the will. Soon Hodgkiss fears that the dog, a special friend of his own dog, Rupert, is being abused. When he starts to investigate his worst fears are soon realised.

When Donald is confronted by determined criminals who have carefully prepared alibis to throw him off the trail he needs more than a little luck before he can get out the handcuffs. Hodgkiss and his companion Pat Strong, fortunately are on hand to provide the vital information needed to show the criminals were at the wrong place at the wrong time.