The History of the University of Oxford: Volume VII: Nineteenth-Century Oxford, Part 2

indgår i serie HISTORY OF THE UNIVERSITY OF OXFORD 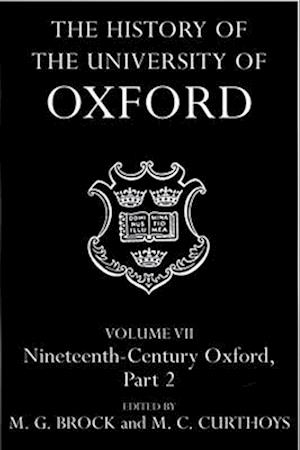 Volume VII of The History of the University of Oxford completes the survey of nineteenth-century Oxford begun in Volume VI. After 1871 both teachers and students at Oxford were freed from tests of religious belief. The volume describes the changed mental climate in which some dons sought a new basis for morality, while many undergraduates found a compelling ideal in the ethic of public service both at home and in the empire. As the existing colleges wererevitalized, and new ones founded, the academic profession in Oxford developed a peculiarly local form, centred upon college tutors who stood in somewhat uneasy relation with the University's professors. The various disciplines which came to form the undergraduate curriculum in both the arts and sciences are subject to major reappraisal; and Oxford's 'hidden curriculum' is explored through accounts of student life and institutions, including organized sport and the Oxford Union. New light is shed on the social origins and previous schooling of undergraduates. A fresh assessment is made of the movement to establish women's higher education in Oxford, and the strategies adopted by its promoters to implant communities for women within the masculine culture of an ancient university. Other widened horizons are traced in accounts of the University's engagement with imperial expansion, social reform, and the educational aspirations of the labour movement, as well as the transformation of its press into a major international publisher. The architecturaldevelopments-considerable in quantity and highly varied in quality-receive critical appraisal in a comprehensive survey of the whole period covered by Volumes VI and VII (1800-1914). By the early twentieth century the challenges of socialism and democracy, together with the demand for national efficiency, gave rise to a renewed campaign to address issues such as promoting research, abolishing compulsory Greek, and, more generally, broadening access to the University. Under the terrible test of the First World War, still more deep-seated concerns were raised about the sider effects of Oxford's educational practices; and the volume concludes with some reflections on thedirections which the University had taken over the previous fifty years. series blurb No private institutions have exerted so profound an influence on national life over the centuries as the universities of Oxford and Cambridge. Few universities in the world have matched their intellectual distinction, and none has evolved and maintained over so long a period a strictly comparable collegiate structure. Now a completely new and full-scale History of the University of Oxford, from its obscure origins in the twelfth century until the late twentieth century, has been produced by the university with the active support of its constituent colleges. Drawing on extensive original research as well as on the centuries-old tradition of the study of the rich source material, the History is altogether comprehensive, appearing in eight chronologically arranged volumes. Together thevolumes constitute a coherent overall study; yet each has a unity of its own, under individual editorship, and brings together the work of leading scholars in the history of every university discipline, and of its social, institutional, economic, and political development as well as its impact on national and internationallife. The result is a history not only more authoritative than any previously produced for Oxford, but more ambitious than any undertaken for any other European university, and certain to endure for many generations to come.

Forfattere
Bibliotekernes beskrivelse Completes the survey of nineteenth-century Oxford begun in Volume VI. After 1871, both teachers and students at Oxford were freed from tests of religious belief. This volume addresses a variety of issues, including women's education, architecture, sport, and scholarship. 32 pp plates, 16 figures