The History of England from the Accession of James I to that of the Brunswick Line: Volume 2 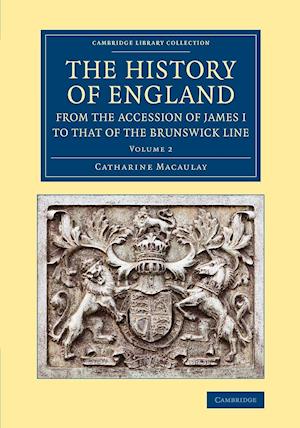 A landmark in female historiography, this work first appeared in eight volumes between 1763 and 1783. Notable for her radical politics and her influence on American revolutionary ideology, Catharine Macaulay (1731-91) drew diligently on untapped seventeenth-century sources to craft her skilful yet inevitably biased narrative. Seen as a Whig response to David Hume's Tory perspective on English history, the early volumes made Macaulay a literary sensation in the 1760s. Later instalments were less rapturously received by those critics who took exception to her republican views. Both the product and a portrait of tumultuous ages, the work maintains throughout a strong focus on the fortunes of political liberty. Volume 2 (1765) opens in 1628 with the abortive English attempts to relieve the siege of La Rochelle. The volume concludes with the execution of the Earl of Strafford in 1641.

Forfattere
Bibliotekernes beskrivelse A landmark in female historiography, this eight-volume work, first published between 1763 and 1783, focuses on the period 1603-89. Notable for her radical republican politics and influence on American revolutionary ideology, Catharine Macaulay (1731-91) drew diligently on untapped seventeenth-century sources to craft her skilful yet inevitably biased narrative.