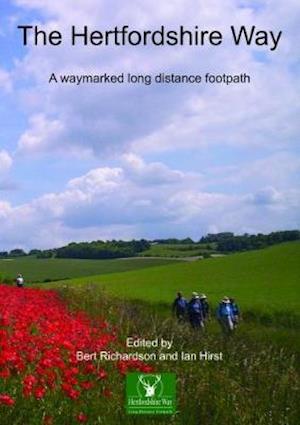 The 195 mile trail covers a large part of this beautiful, populous and rich county, incidentally one of the smallest counties in England, only 634 square miles. It is a county of rich contrasts. In the north-east there are wide open panoramas over low hills and farm lands as seen in the area around Barkway. Standing on Therfield Heath you can look down on to the flat plains of Cambridgeshire. Then in the south west there are the steep wooded escarpments of the Chilterns. The route visits ancient market towns, the Cathedral City of St Albans and countless picture postcard villages nestling in an intimate landscape of farmland and woods.In 1801 Hertfordshire had a population of about 100,000; now it is well over one million. It has never been a heavily industrialised area but it has seen its own industrial changes from malting and brewing, plaiting of straw for hats, paper making, industries associated with wool such as fulling (cleaning the woven cloth) and silk mills. Today technical industries and service industries dominate the industrial scene.A good introduction to the county, and how it developed from pre-history can be found in "The Hertfordshire Landscape" by Munby (1977) and "Hertfordshire, a Landscape History" by Rowe and Williamson (2013).People have settled the area since prehistoric times. Along the very ancient Icknield Way there is evidence of many waves of people. On Therfield Heath (see Leg 1) there is a long barrow of the Neolithic Age (2500 BC) and round barrows of the Bronze Age (1000 BC). There is evidence of the Beaker People in Hertfordshire. The hill forts of the Iron Age settlers gave way at the height of their power to the might of the Roman invasion. Many Roman roads go through Hertfordshire, e.g. Ermine Street and Watling Street, and our walk crosses the remains of the Roman town of Verulamium (St Albans).In the Dark Ages Hertfordshire was part of the shifting boundary between the English settlers (Angles & Saxons) and the later invaders, the Vikings. It was a long and turbulent time before the country became united. A good novel, which covers this period, is the "Conscience of the King" by Alfred Duggan.In the Medieval period the great abbeys were founded and one can still be seen in St Albans (see Legs 4 & 5). Many fine Medieval churches can be seen on this walk and short detours will be worth your while to seek out some of these (unfortunately due to the presence of valuable historic items most country churches are now locked on weekdays).During the 16th to 18th centuries many country estates were established in Hertfordshire e.g. Hatfield House, Knebworth House and Ashridge House. Some of the houses have not survived but our walk will take you through parkland, which reminds the walker of those estates. Walkers passing through Ayot St Lawrence will be going through such parkland and Ashridge still has its great house. It was first a monastery, then a great house, now a management college.The growth of London and the coming of industry saw some rapid development in the county in the 19th and 20th centuries. An example of this development was the Ovaltine factory at Kings Langley with the model farm to feed its need for eggs and milk. The factory and farms are all now sadly gone (see Legs 7 & 8).No major rivers flow through the county, however it is still famous for the large number of chalk streams and their associated wildlife (the River Lee or Lea, a tributary of the Thames has its source just north of Luton, flows though the county and is navigable up to Hertford). The Grand Union Canal passes through our county on its way north west (see Leg 7). The railways opened up Hertfordshire for industry and settlement and such towns as Hemel Hempstead and Watford grew from several hundred people to 80,000 plus. Many of the great road routes, which fan out from London (such as the A1, A5, A6, A10 and M1) pass through our county. Finally we saw the first garden cities (Letchworth and Welwyn Garden City) and the new town of Stevenage. The great orbital road, the M25, cuts its way through the county (see Legs 7 to 9) not forgetting the electricity pylons, supplying our thirst for power.Many famous people are associated with Hertfordshire. Samuel Pepys was a regular visitor who once when staying in Baldock noticed that the landlady was very pretty but "I durst not take notice of her, her husband being there".Queen Elizabeth I, then a princess, was a virtual prisoner at Hatfield House when the Roman Catholic Queen Mary was on the throne. King James I had a palace at Royston (the start of our walk) from where he hunted on the lands of north Hertfordshire. The so called Rye House Plot to kill King Charles II was hatched on its borders. Izaac Walton of "Compleat Angler" fame knew the River Lea well. The earliest Christian martyr, St Alban, was executed in Roman times at the site of the city bearing his name. Francis Bacon lived at Gorhambury (an estate near St Albans through which our walk passes). He is buried in the church of St Michael nearby. George Bernard Shaw made his home in Ayot St Lawrence; his home is now a National Trust property and is close to our route. George Orwell, Barbara Cartland, Charles Lamb and W. E. Johns lived in the county.In spite of the development, most of your walking will be on rural pathways through fields, villages and woods where you can enjoy the peace and forget the might and noise of industry that remind you of the century we live in -- Good walking

Forfattere
Bibliotekernes beskrivelse The 195 mile trail covers a large part of this beautiful, populous and rich county, incidentally one of the smallest counties in England, only 634 square miles. It is a county of rich contrasts. Colour photos, paintings, line maps