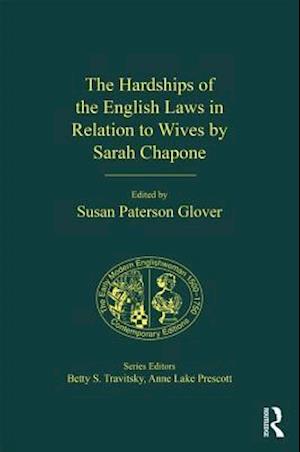 Susan Paterson Glover here presents, in modern type, a critical edition of the first printed work by an English woman writer, Sarah Chapone, on the inequity of the common law regime for married women. Glover's extended, original introduction provides an account of Chapone's life; a discussion of the influence of Mary Astell's work on Chapone's thought and work; and a review of the legal status of women in England's eighteenth century, with particular attention to marriage and the doctrine of coverture and the relations of women, law, and property. It concludes by acknowledging the importance of this text to any consideration of the evolution of a discourse of "rights" for women in the Anglo-American legal tradition, and its contribution to a movement for property rights and women's equality whose genesis is generally located in the legislative changes of the nineteenth century. The edition contains valuable appendices including, among other writings, excerpts from Chapone's correspondence with Samuel Richardson; excerpts of responses to Chapone's work from the Weekly Miscellany; and excerpts from contemporary legal literature. Also included is an annotated text of Chapone's pamphlet on the Muilman controversy, Remarks on Mrs. Muilman's Letter to the Right Honourable The Earl of Chesterfield (London, 1750).