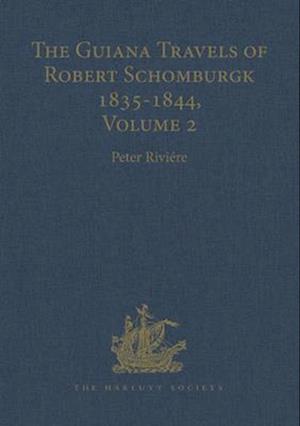 This is the second of a pair of volumes publishing the unedited full reports of Schomburgk's travels in Guiana between 1835 and 1844, previously available only in greatly abridged and heavily edited versions. After his explorations in Guiana between 1835 and 1839 on behalf of the Royal Geographical Society, which are the subject of Volume I of The Guiana Travels of Robert Schomburgk 1835-1844, Robert Schomburgk travelled to London. He was appointed Her Majesty's Commissioner for Boundaries with the duty to survey the boundaries of British Guiana, hitherto undefined. His surveys between 1841 and 1843 consisted of three journeys. The first took him to the mouth of the Orinoco River, from where he traced the boundary south-westward to the Cuyuni River, before returning to Georgetown. The second journey involved the survey of the boundary with Brazil: first, south to the sources of the Takutu River; and then north to Mount Roraima. In the third he covered the boundary with Dutch Guiana (modern Surinam), which involved an arduous trip down the length of the Corentyne River. Schomburgk returned to London in 1844 and was knighted for his services. Volume II of The Guiana Travels contains his reports of these journeys. In abbreviated form they appeared in the Journal of the Royal Geographical Society. Here they are published in full, including the material censored by the Colonial Office, which mainly details abuses of the native population committed by Venezuelans and Brazilians. In an 'Epilogue' an account is provided of his later career. The volume also includes two appendices: a summary of the boundary disputes which arose as a result of Schomburgk's survey and a vocabulary of vernacular plant names.

Forfattere
Bibliotekernes beskrivelse Robert Schomburgk's surveys between 1841 and 1843 consisted of three journeys. The first took him to the mouth of the Orinoco River, the second involved the survey of the boundary with Brazil, and in the third, he covered the boundary with Dutch Guiana (modern Surinam). This book contains his reports of these journeys.