- The Remarkable Life of William Marshal, the Power behind Five English Thrones 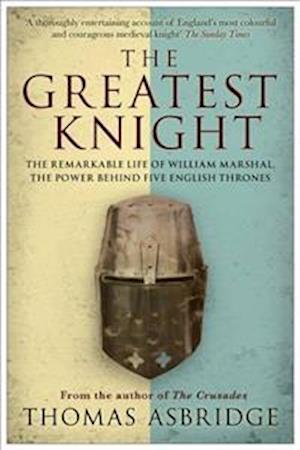 A thrillingly intimate portrait of one of history's most illustrious knights - William Marshal - that vividly evokes the grandeur and barbarity of the Middle Ages William Marshal was the true Lancelot of his era - a peerless warrior and paragon of chivalry -yet over the centuries, the spectacular story of his achievements passed from memory. Then, in 1861, a young French scholar stumbled upon the sole surviving copy of an unknown text, later dubbed the History of William Marshal. This richly detailed work helped to resurrect Marshal's reputation, putting flesh onto the bones of this otherwise obscure figure, but even today he remains largely forgotten. As a five-year-old boy, William was sentenced to execution and led to the gallows, yet this landless younger son survived his brush with death, and went on to train as a medieval knight. Rising through the ranks to serve at the right hand of five English monarchs, he became a celebrated tournament champion, baron, politician and, ultimately, regent of the realm. He befriended the great figures of his day, from Richard the Lionheart to the infamous King John, and helped to negotiate the terms of Magna Carta - the first 'bill of rights'. Yet at the age of seventy he was forced to fight in the frontline of one final battle, striving to save the kingdom from French invasion in 1217. In The Greatest Knight, renowned historian Thomas Asbridge draws upon an array of contemporary evidence, including the thirteenth-century biography, to present a compelling account of William Marshal's life and times, from rural England to the battlefields of France, the desert castles of the Holy Land and the verdant shores of Ireland. Charting the unparalleled rise to prominence of a man bound to a code of honour, yet driven by unquenchable ambition, this knight's tale lays bare the brutish realities of medieval warfare and the machinations of royal court, and draws us into the heart of a formative period of our history, when the West emerged from the Dark Ages and stood on the brink of modernity. It is the story of one remarkable man, the birth of the knightly class to which he belonged, and the forging of the English nation.